Home > What's New > Administrative Charge Up 1.2% due to Reduced Revenues 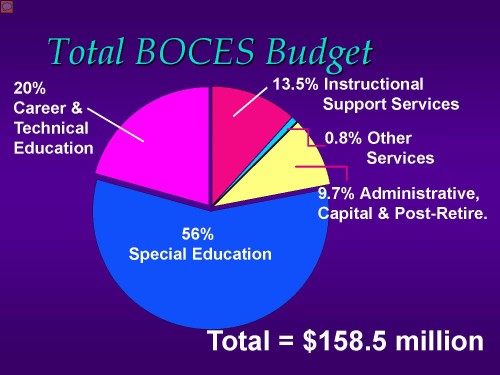 The administrative budget reflects a decline in rates for the ERS retirement system for current employees coupled with a modest increase in salaries due to contractual agreements that have lower salary costs for those hired to replace retirees. Higher costs for the post-retirement benefits of a larger pool of retirees, however, led to an increase in the overall administrative budget.

Revenues have continued to decline due to the low interest rates on deposits and fewer grants. The administrative charge is set by subtracting revenues from the administrative budget. Unlike local school districts that receive revenue from NYS such as Foundation Aid, GAP aid and Smart Bond Technology aid in addition to their tax levy, Western Suffolk BOCES does not have any revenue stream other than that which is assessed to local districts for its administrative and capital charges and the tuition charged for the students who attend BOCES programs. Any surplus from the current year’s budget is refunded to the local districts three to six months following the close of BOCES’ fiscal year. In 2015, this BOCES refunded $3.4 million to our 18 participating districts.

The capital charge, which had been frozen for the past five years, will rise due to an increase in the rent for the Brennan Middle/High School, the only building that this BOCES does not own. To ensure adequate program space and the long-term viability of the program, BOCES agreed to a 10-year extension for this facility from North Babylon.

The BOCES Board will present the budget and answer questions at its Annual Meeting on Tuesday, April 12 in the Large Conference Room at the Central Administration Office, 507 Deer Park Rd., Dix Hills. By law, the 18 Boards of Education within Western Suffolk BOCES will vote on the BOCES administrative budget on April 19 when local boards will also elect three members to serve three-year terms on the BOCES Board. Maryann Zumpano of Smithtown, Ilene Herz, Esq., of Half Hollow Hills, and Mildred Browne of Wyandanch are seeking re-election.

Program budgets change throughout the year to accommodate districts’ requests for services. Each district pays only for the services it requests. For 2016-17, tuition increases for high school students in career and technical education at Wilson Tech and for special education programs will range from 1.4 to 1.9%. BOCES has held the average tuition increase over the past five years to 1.65%.

The newsletter Budget News contains additional information about the BOCES administrative and capital budgets and how the charges are allocated to each district. The Tentative BOCES Budget contains details about the administrative, capital and program budgets.