Twelve students were honored by the Board of Education of Western Suffolk BOCES at its annual Recognition of Outstanding Students program, which was held in conjunction with the May 8 board meeting.

Students were selected for the recognition by their teachers and administrators, who took turns at the podium to talk about the honorees’ accomplishments. The students honored were:

Djamilie Jules, Wyandanch, Criminal Justice Program: Djamilie came to the United States three years ago after surviving the earthquake in Haiti. Djamilie has made the most of every opportunity and always works hard to exceed expectations. She is a member of Junior ROTC, took part in the Town of Babylon UJIMA internship program and is a SkillsUSA member and officer.  She is a scholar with a 90-plus average at Wilson Tech and her home school.

Julia Gabrell, West Babylon, Advertising/Graphic Design Program:  Julia is president of SkillsUSA, the student leadership organization for Wilson Tech, and participated in the Leadership Conference in Syracuse. At the Regional SkillsUSA Competition, she won first place in Extemporaneous Speaking and advanced to the state contest. At her home school, she serves as Student Council Vice President. In recognition of her efforts, Julia received the Suffolk County High School Principals Association Leadership Award.

Kevin Kelly, Harborfields, Construction Electricity Program:  Kevin was selected by his instructor to represent Wilson Tech at the Regional SkillsUSA competition and his first place finish earned him a spot at the state contest in Syracuse, where he won First Place in the Industrial Motor Control Competition. Kevin maintains excellent grades while working at a local restaurant more than 20 hours per week.  He plans to apply for an apprenticeship in the electrical union.

Mateusz Mojsa, Commack, Automotive Technology Program: Mateusz’s top-notch skills were showcased in the Greater NY Automobile Dealers Association Competition as well as the SkillsUSA regional and state competitions.  Matt passed the ASE MLR Certification exam and was selected to participate in our Automotive YES work-study program enabling him to work with a master technician at Paul’s Rods and Restos.

Alexa Peters, Smithtown, Cosmetology Program:  Alexa was inducted into the National Technical Honor Society and is a SkillsUSA Officer.  She earned first place in the regional SkillsUSA Job Interview Leadership competition.  She maintains her grades, has near perfect attendance and is highly regarded as an intelligent student who consistently exhibits a positive attitude.

Taylor Davis, Amityville, JEA Alternative Program: Taylor has successfully navigated her classes at the Alternative Program while at the same time participating in the Cosmetology Program at Wilson Tech Huntington.  Taylor enjoys interacting with her peers as well as the adults she comes in contact with and  is looking forward to beginning the next phase of her life, focusing on college and her cosmetology career.

Kathryn Krebs, Commack, Manor Plains High School Program: Kathryn received the ALIVE Outstanding Student award, which recognizes a senior who has excelled in academic performance, attendance, and professionalism.  She has participated as a student leader in the Manor Plains High School’s Student Government and is dedicated Cosmetology student. She plans to pursue and obtain her Cosmetology license with a specialization as a colorist.

Eric Hetherington, Babylon, Brennan Middle School Program: Eric received the Presidential Award for Academic Excellence, which is given to students who maintain a grade point average of 90-100.  Eric  is a high achieving academic student, who regularly assists peers who may be struggling with a new concept in class.  Eric is well respected by both the staff and students.

Matthew Kabacinski, Deer Park, JEA Jr/Sr High School: Matthew received the Paul Loiacono Memorial Award because he always demonstrates a strong work ethic, respect for his teachers and compassion toward his peers.  At his work study program at area hotels, Matthew exudes boundless energy and has an incredibly positive attitude regardless of the task at hand, which is why he has been selected to become part of the team in the kitchen

Alexis Trovato, Lindenhurst: Alexis is the recipient of the SEPTA Council Executive Director Award. Alexis played on the Varsity soccer team this past fall and is currently participating in Varsity track.  She brings her leadership skills and dedication to activities including Italian Club, Student Council, Peer Mentoring Club, Special Education Buddy Program and the Breast Cancer Coalition.

Matthew Carter, North Babylon, Brennan HS: Matthew is the recipient of the David Kidane, Jr. Memorial Award.  He has made a strong commitment to accomplish his personal goals, is incredibly hard working in all of his classes and has obtained the Principal’s Honor Roll for his exceptional average.  He has also excelled as a student in Wilson Tech’s Nurse Assisting and Professional Health Careers programs.

John Celestin, Amityville, ALC Program: John has maintained a strong average and along with his core academic coursework, John has taken advantage of the Wilson Tech program, studying Electronics and Robotics at the Huntington Campus.  John incorporated his technical education into his English senior thesis requirement, writing about “Robotics and How Technology Can Make Our Life Easier.” 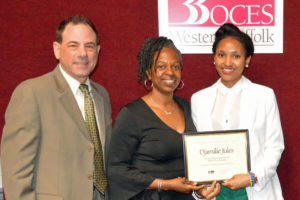 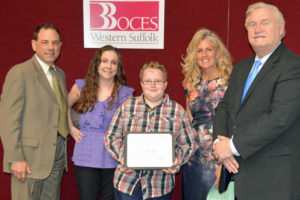 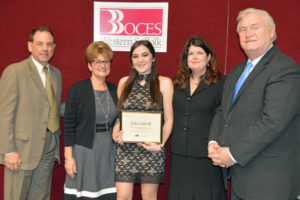 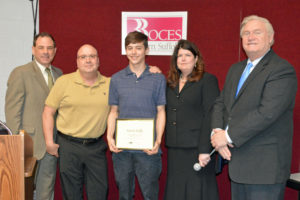 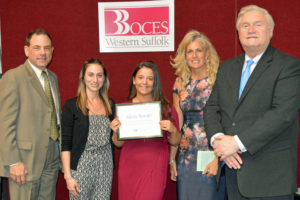 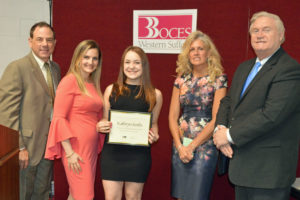 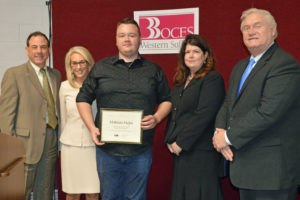 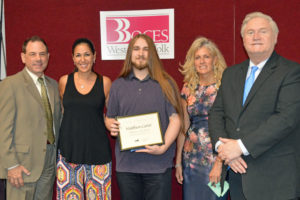 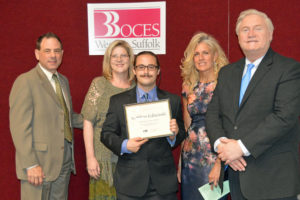 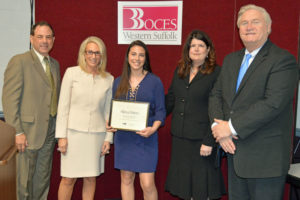 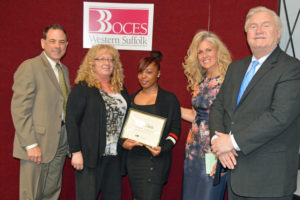